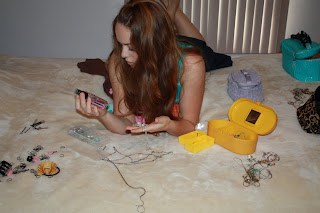 I have been on the verge of being an angel all my life, but it's never happened yet.
- Mark Twain's Autobiography

Now isn't that the truth? Twain always makes me laugh because his statements are so true!
However, we can assured that. . .

And I am sure of this, that he who began a good work in you will bring it to completion at the day of Jesus Christ.

Essentially Christ will conform us to the image of his son if we seek him with all our heart and all our soul.

One of the most important things in the world is that whatever we do we manifest Christ-likeness so that through us, people might come to know the one and only God.

Posted by Winters Haven at 7:09 AM No comments:

Since the early days of the church, scholars and theologians have found in Genesis the first announcement of the coming Messiah. Today's passage gives us what is called theprotevangelium - the "first gospel."

The context of this passage is well-known to most of us. Having thumbed their noses at God by eating the forbidden fruit in the garden of Eden, Adam and Eve find themselves alienated from their Creator (Gen. 3:1-13 ). Before He pronounces His righteous judgment upon them, however, the Lord curses the tempter. The serpent will crawl upon the ground and lick the dust. He will bruise the heel of the woman's offspring or, in other translations, "her seed," and her seed will bruise the serpent's head (vv. 14-15).

This pronouncement has cosmic significance. The serpent in this passage is no ordinary reptile, he is Satan, the adversary of God and His people (Rom. 16:20; Rev. 12:9). The Lord pledges to put enmity between the serpent and the woman's seed (Gen. 3:15). This conflict is God-initiated and perpetuated. It has a visible reminder in snakes who lick the dust of defeat, but the one whose head will be bruised - the one who will suffer a crushing blow - is the Devil himself.

It is the identity of the woman's seed that tells us this passage is messianic. Grammatically, "seed" is a collective singular and can refer to a whole group of people. The woman's seed cannot be every child of Eve because Scripture calls God's human enemies "the children of the Devil" (John 8:39-47 ), thereby identifying some people as the serpent's seed. If the Lord's enemies are the seed of the serpent, then His friends among mankind must be the victorious woman's seed. These will suffer bruising from the evil one before bruising his head. God's people will suffer, but they will win in the end (for example, Ex. 1, 14).

However, even the friends of the Almighty cannot defeat Satan themselves. They need a representative to fight on their behalf. We have seen that this One is King Jesus, who as the Son of David defeated Satan on the cross for our sake. He is the seed of the woman par excellence who suffered the worst bruising of all so that He might crush the Devil (Col. 2:13-15).

Proverbs 21:31 tells us that "the victory belongs to the L ord." Jesus defeated death, sin, and the evil one on the cross and now shares with us the benefits of His conquest. No problem of ours is too formidable for the Lord. There is no sin that we cannot overcome if we are in Him. There is no enemy of ours that can finally defeat us. Be encouraged today that our Savior has won a great victory, and, therefore, we who are in Him need not worry about tomorrow.

Posted by Winters Haven at 7:51 AM No comments:

In the Fullness of Time

Our study this month has dealt mainly with the miraculous birth of the Savior in Bethlehem. This Messiah, we have seen, comes in fulfillment of the Old Testament promises. In the interest of looking at the biblical prophecies about Jesus more closely, we will take a short break from Matthew and follow Dr. R.C. Sproul's teaching series Coming of the Messiah as our guide.

Across the United States this day, many college students are sitting under professors hostile to the New Testament. Parallels are often drawn between Greek myths of dying and rising gods and the biblical account as proof that the Scriptures are just another work of mythology. Unfortunately, young people are too often unprepared for this onslaught and begin to doubt the Christian faith.

However, as those familiar with ancient literature well know, these similarities are superficial. The Greeks made no real attempt to defend their myths as historical while the Bible grounds itself in real space and time. Luke 2, for example, locates the birth of Jesus during the reign of Caesar Augustus and the governorship of Quirinius, both of whom were real people. The evangelist assumes that we will take his account at face value - that Jesus was a real person who lived in space and time. Scripture is also clear that God became incarnate in the person of Christ Jesus (John 1:14 ). Ancient Greeks abhorred this idea because they believed the physical body to be corrupt, unlike the spiritual realm. Many other such differences between the Bible and pagan thought could be cited.

We must not miss the emphasis Scripture places on history. God's Word is clear that the events it describes actually occurred, and even tells us our faith is in vain if events like the resurrection of Jesus never happened (1 Cor. 15:14 ). Yet, Scripture does not give us every detail concerning what happened between the time of Adam and the apostles; it often omits pedantic figures and details (as was common in those days) in order to relay God's plan of redemption (2 Kings 20:20-21). When time was "full," when all things were perfectly ready, the most significant event of all took place - Jesus was born (Gal. 4:4-5 ). Tomorrow we will begin to study what the Old Testament says about this fullness of time.

College students are not the only ones who face attacks on the historicity of Scripture. Hollywood, the Internet, apologists for other religions, and so on bombard us with assaults on Scripture's integrity. The Bible is the most vilified book on the planet, and yet its stories are regularly found to be historically reliable. Take time to find some resources on the historicity of Scripture so that you may be able to answer its critics ( 1 Peter 3:15-16).

Posted by Winters Haven at 3:58 AM No comments:

BibleGateway.com http://www.biblegateway.com/, offers a free email devotional from R.C. Sproul. The devotionals have been excellent thus far.
With Spirit and Fire

John Calvin looked to John the Baptist's condemnation of the Pharisees and Sadducees as an example of how the church should deal with those especially hard in heart. He comments on Matthew 3:7-10 that "those whose habits of uttering falsehood to God, and of deceiving themselves, lead them to hold out hypocrisy and pretension, instead of the reality, ought to be urged, with greater sharpness than other men, to true repentance." At times only strong confrontation will rescue the soul of a professing believer who has grown complacent and presumed upon the Lord's grace (18:15-20; James 5:19-20).

Matthew 3:7-10 is clear that the Sadducees and Pharisees needed such upbraiding. These Jewish leaders during the Lord's earthly ministry were often at odds because of their conflicting theological opinions. The party of the Sadducees was a kind of priestly aristocracy not against conforming to Roman customs and law. They also denied the bodily resurrection of God's people, but the idea that they accepted only the five books of Moses as Scripture is probably mistaken. Like the Pharisees, they submitted to the entire Old Testament. On the other hand, the Pharisees added the oral law - traditions that people followed as a guide to the Torah, that is, the Scriptures. The Pharisees were not priests but scholars who affirmed the resurrection and were popular with the people. Despite their disagreements, both groups united against John and later, Jesus. After all, "the enemy of my enemy is my friend." Both groups had seats on the Sanhedrin, the ruling council of the Jews, and many of them apparently felt that Abrahamic descent guaranteed them a place in the kingdom (v. 9).

It is one thing to reject John the Baptist, but quite another to deny the One whom he precedes. John promises in today's passage that the Messiah will baptize not just with water but with the Spirit and fire ( v. 11), an image with double meaning. The long awaited flame of the Holy Spirit will purify the soul and eventually remove all corruption from those who submit to the Son of David (Isa. 1:24-26). But those who continue in their rejection of this king will find only a fiery destruction (Isa. 66:15-16; Matt. 3:12).

The purifying work of the Holy Spirit commences in the believer when he first turns to Christ. Sometimes the Spirit works on us in the fire of adversity, through which the Lord promises to take us for His good purposes (Isa. 43:1-7 ). When we face trials in our lives we have an opportunity to prove our faith and reliance on God. If you face trouble this day, consider how the Lord may be using it to purify your soul.

INTO the WORD daily Bible studies from TableTalk Magazine, Matthew Studies. Copyright © 2008 by Ligonier Ministries.
Posted by Winters Haven at 4:52 AM No comments:

Yes we have neglected to blog lately- much to our shame.
But, we have excellent excuses. School and work, plus activities of daily living that we endeavor to stay on top of (cleaning, laundry, neatness, cooking, eating and grocery shopping somewhat).
We had an enjoyable time with our family over the holidays and perhaps I'll be able to steal some picures from Joy's computer so you can see for yourself. Meanwhile, just remember if this blog is quiet, it is for a good purpose:)
We did miss the boys though because they were working on Christmas. Enjoy this verse to welcome in the new year.

Blessed be the God and Father of our Lord Jesus Christ, which according to his abundant mercy hath begotten us again unto a lively hope by the resurrection of Jesus Christ from the dead.
I Peter 1:3.

Auf Wiederhören!
Posted by Winters Haven at 3:07 PM No comments: